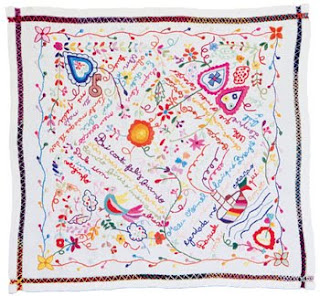 There is a lovely tradition in northern Portugal of young girls sewing and embroidering handkerchiefs for their boyfriends or potential boyfriends. It is dying out now but there are still some skillful ladies keeping the tradition alive.
It is thought that the custom began when the so-called lower classes began to imitate the use of handkerchiefs by the upper crust in the 17th and 18th centuries. Girls of marriageable age would spend weeks if not months stitching handkerchiefs to give to a boy they had their eye on. If the gift was accepted then the couple were considered to be a match and the young man would wear the handkerchief in his Sunday coat pocket, tucked into his belt or tie it to the end of a stick that he usually carried.
The girls would also wear handkerchiefs tucked into their waistbands, which at dances and festivals were often stolen by the young men who would play at being matched to the girls at the event.
The handkerchiefs are usually white with brightly-coloured embroidered symbols and poems. The words in the verses are often misspelled giving the handkerchiefs a naive charm.
See some wonderful examples for sale on this website: Aliança Artesanal.
Now I just have to convince somebody to get me one.
Posted by Catarina Aleixo at 09:01 4 comments:

This is said when it’s chilly out and is usually preceded by one of several possible expletives. If you live somewhere in northern Europe you are probably thinking, “these Portuguese are weaklings! We pay for Wintersun holidays to Portugal in December what are they complaining about?”

What I love about this expression is how it manages to home in on that feeling of bone-deep freezing cold that might literally shatter your body into a thousand little shards of ice. Now that’s what serious cold feels like, isn’t it?

It’s true that this expression can be overused. Sometimes it really is only chilly by Portuguese standards and if that’s in the summer it could be as warm as 20 degrees C out and is just based on the fact that last week it was probably 35 degrees or more. But right now – in the middle of an unusual cold snap in February - it’s chilly by anybody’s standards. Brrrrrr.
Posted by Catarina Aleixo at 08:58 2 comments: 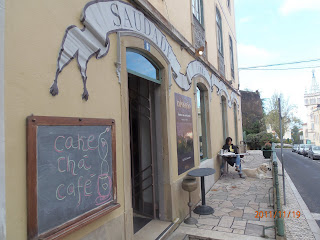 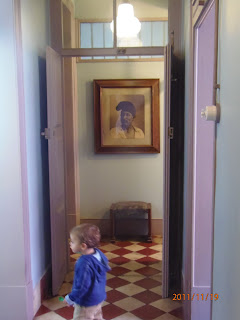 There are some places that to me are Portugal concentrated in one spot. Café Saudade is one of them. It is somewhere to go that just lets you breathe easy and it celebrates the real Portugal. Not the Portugal of shopping centres or highways, but the Portugal of my childhood, of long trips into the countryside.
First of all it is in the magical town of Sintra, but that doesn't guarantee loveliness as many a tourist has found to their cost. Saudade, however is a veritable rabbit warren of loveliness. The building itself was once a queijada factory making traditional Sintra cheesecakes, although factory seems too industrial a word for the authentic beauty of the place.
The café's menu is excellent and offers a variety of traditional Portuguese cakes and sandwiches as well as fruit tarts, an incredible gooey chocolate cake and light lunch options. Whiling away an afternoon with a cup of herbal tea or even a single espresso - nobody will make you feel like you need to have anything more if you don't want it - is something I do far too infrequently to do this fantastic café real justice.
Saudade is the heart and soul of its owners the sunny Mary Pereira and her husband Luís. Mary is Portuguese-American and in spite of, or perhaps because of, this she actively celebrates the Portuguese heritage that so many people take for granted. Saudade sells Portuguese handicrafts - not tourist tat the real deal - and also has its own little silver store (Prataria) offering the most gorgeous traditional Portuguese jewellery.
If you have never been there I couldn't recommend it more highly.
Café Saudade
Avenida Dr. Miguel Bombarda 6
Sintra
2710-590 SINTRA
Tel: 212428804
Posted by Catarina Aleixo at 17:01 7 comments: 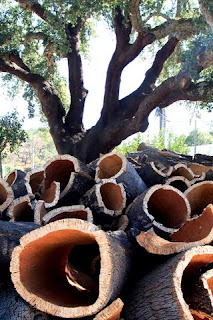 I'd like to register my vote to make cork oaks one of the wonders of the world. This may seem like an overstatement, but they really are one of the most incredible, sustainable and eco-friendly resources on the planet and Portugal accounts for about 50 percent of the world's cork production.
The cork that most people know in the form of bottle stoppers (corks), floor tiles and trivets starts out life as the bark of an evergreen tree; the cork oak (quercus suber). Skilled workers strip the bark of the cork oak every nine years and the tree is left unharmed to regenerate its bark to be harvested again and again, for up to 200 years. This bark makes corks for wine by the billion.

The Worldwide Fund for Nature (WWF) estimates that the 108,000 hectares of Portugal’s cork oak forests – the largest in the world – absorb about 10 million tonnes of carbon dioxide every year. It also adds that each cork tree sustains over 100 species of wildlife, including the critically endangered Iberian Lynx.

Portugal's cork forests are under threat, however, as aluminium screw caps and manmade stoppers have replaced natural cork in wine bottles. Next time you reach for a bottle at the supermarket choose natural cork. It's a simple step that helps preserve this small corner of the planet.

Posted by Catarina Aleixo at 19:41 No comments:

The best and safest airline in Western Europe 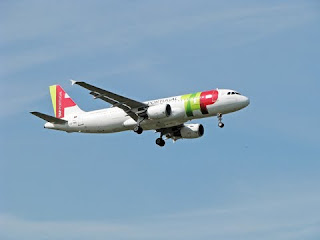 Say what you like about Portuguese airline TAP Portugal - I remember a joke that said TAP stood for Take Another Plane - but it turns out it's the safest airline in Western Europe and, by some accounts, also the best.
The only fatal crash it has ever had in its 66-year history was in Madeira in 1977 when 164 people died. Not wanting to make light of those deaths, that's still a very healthy safety record. In January 2011 TAP Portugal was named as Western Europe's safest airline in the JACDEC Airliner Safety Report and fourth in the world behind Australia's Qantas, Air New Zealand and Finnair of Finland.
I'll take safety over style and comfort any day of the week. It's at the top of my list for requirements for an airline, but according to Global Traveler Magazine TAP is also Europe's Best Airline for 2011. This award was given to the company based on opinions from 36,000 readers who responded to the magazine's GT Tested Reader Survey.
In 2010 it also won the title of World's Best Airline from the UK's Condé Nast Traveller magazine.
It now serves 66 destinations in 31 countries and operates around 1,850 flights per week.
It's a state-owned airline and there are plans to privatise it as part of the conditions for Portugal to receive its financial bailout package. Here's hoping that whoever takes a slice will keep up the good work.
Posted by Catarina Aleixo at 14:57 No comments: 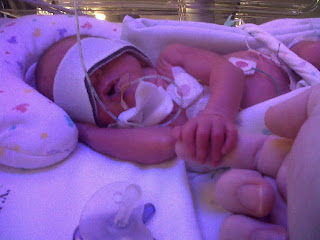 Most people would not think that hospital care in Portugal is up to much, even those that live here. Now I'm here to tell you exactly the opposite is true. That's from personal experience, too.
Back in November 2009 I was sent to hospital on total bedrest in danger of miscarrying my baby. I stayed in bed for eight full weeks in my own private room with a TV and bathroom - that I couldn't actually get up to use but that's a whole other story - all to myself. Traumatic as the whole experience was I was treated with nothing but kindness, dignity and professionalism at every step.
The point of this post, though is about what happened after that. My baby was born at 30 weeks, which is ten weeks before his due date. His care was second to none. He had access to all the necessary technology to keep him breathing and to develop outside the womb. In all, after some respiratory complications, he spent nearly four months in hospital. Not only did it not cost us a single penny - other than the taxes we pay of course - but he got state-of-the-art care and I was extremely thankful that he was born right here in Portugal. If it happened again I wouldn't choose to be anywhere else.
It turns out that Portuguese neonatal care is ranked amongst the best in the world. I know because I checked while I was on bedrest because I'd been convinced by all the bad press, too. We would have been worse off in both the UK and the US.
In terms of the overall infant mortality rate Portugal also fares better than a number of nations that you might expect to outrank it. According to indexmundi Portugal's infant mortality rate stands at 4.66 deaths out of every 1,000 live births, just behind the UK with 4.62 deaths per 1,000 and Australia with 4.61. New Zealand's infant mortality rate is 4.78 Canada's is 4.92 and in the US it is 6.06 deaths per 1,000 live births.
My son is now nearly two years old and thriving. He's had a lot of hospital appointments to check on his progress over his little lifetime, but he's doing great. We never had to fight for treatment or wait to be admitted to hospital. He's never been on a waiting list or had to be approved for hospital care or vaccines. He just gets what he needs; no questions asked.
This stuff really matters and Portugal is very good at it.
Posted by Catarina Aleixo at 12:15 No comments: 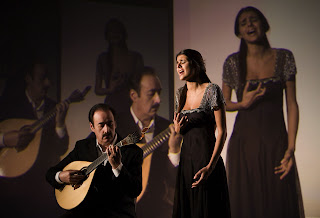 I know, I promised when I started this blog that I wouldn't mention Fado. Well, I'm breaking that promise today and I'm unashamed.
Fado - Portugal's national music - has been given UNESCO World Immaterial Heritage Status. Hurrah to that!
I sometimes wonder if you have to be Portuguese to get it. It certainly embodies a very particularly Portuguese way of viewing the world. The name Fado itself simply means fate, so that gives you an idea of where it's coming from. It's a melancholy type of music/song that tends to be all about what has been lost. Sounds like a bummer, doesn't it? Well, it's actually astoundingly beautiful coming from the right vocal chords and the dextrous fingers of a master of the Portuguese guitar (similar to an onion-shaped mandolin). A good Fado will make you tingle all over; there's something guttural and primeval about it.
On a trip to Lisbon a visit to a Fado venue is a must. The best, in my opinion, are those where amateurs get up and sing. This can make the quality a bit hit-and-miss but that's also part of the charm and makes the good ones all the more worth the wait. Try Tasca do Chico in the Bairro Alto neighbourhood or Tasca do Jaime in the Graça neighbourhood for an authentic and far cheaper experience than the Fado houses catering for tourists. Tasca do Chico for a late night and Tasca do Jaime for Fado in the afternoon (very unusual).
The most famous of Portugal's Fado singers was Amalia Rodrigues and though she died in 1999, she is considered a national treasure. Here she is at her best:

Nem às paredes confesso
More recently the most widely-acclaimed Fado singer is Mariza. And here she is at her haunting best:

Ó gente da minha terra
make sure to listen at least as far as 01:25. I promise it's worth it.
Posted by Catarina Aleixo at 14:55 4 comments:

Catarina Aleixo
I'm a Lisbon-based writer and translator blogging about all things Portugal. For more information about me and my work please go to my professional website www.catarinaaleixo.com.